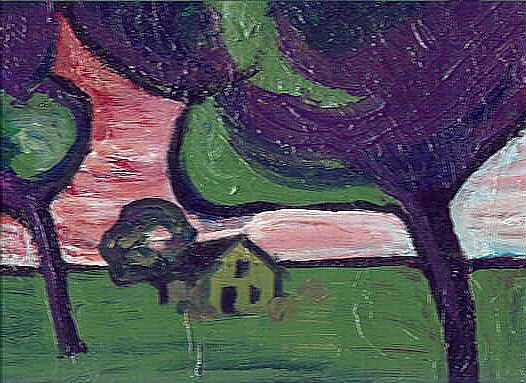 stolen while on loan to exhibit in Vancouver 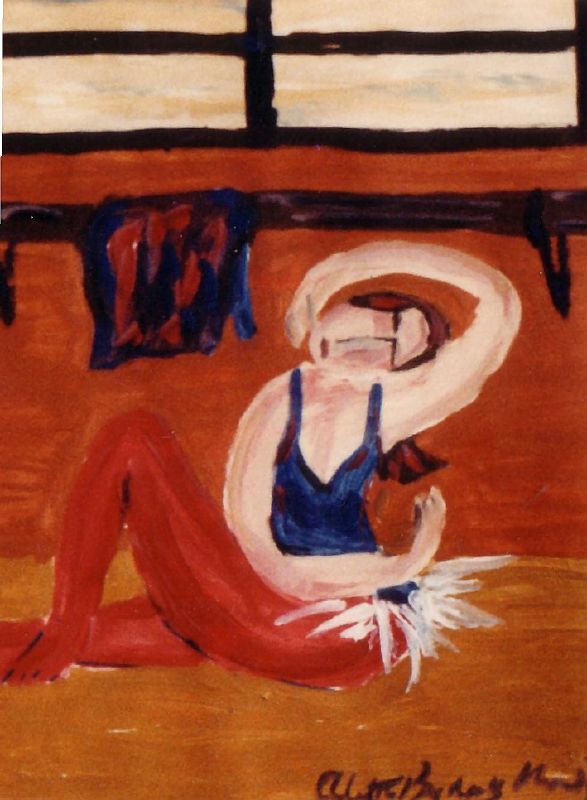 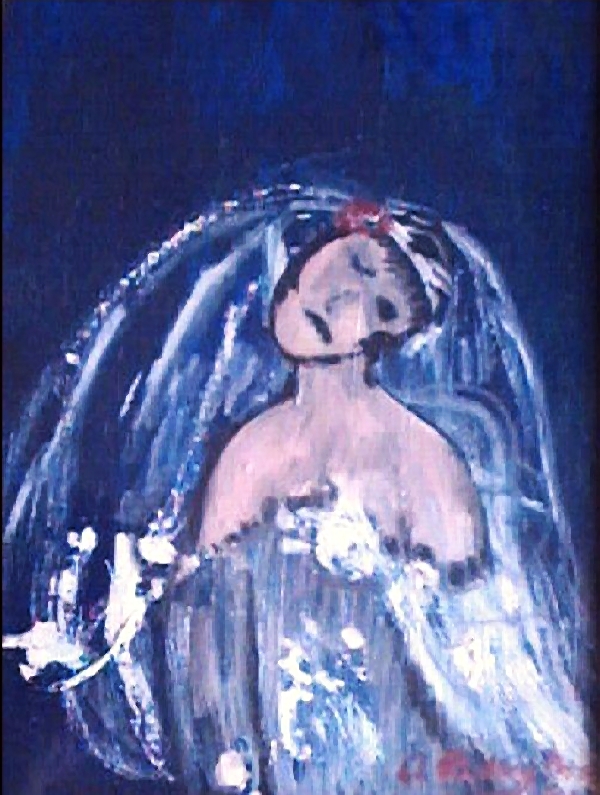 I had just primed the canvas in blue when my baby daughter cried out and I went to check on her, when I returned my son at age two, looking triumphant, brush in had had started to paint.  I left everyone of his brush strokes. they acted as my inspiration, 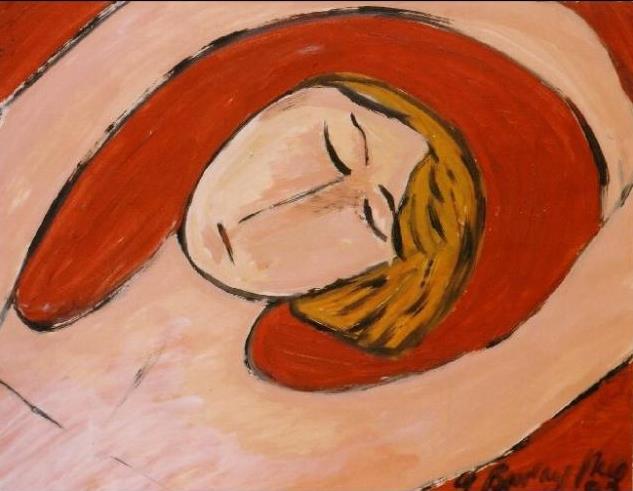 portrait of one of my ballet students 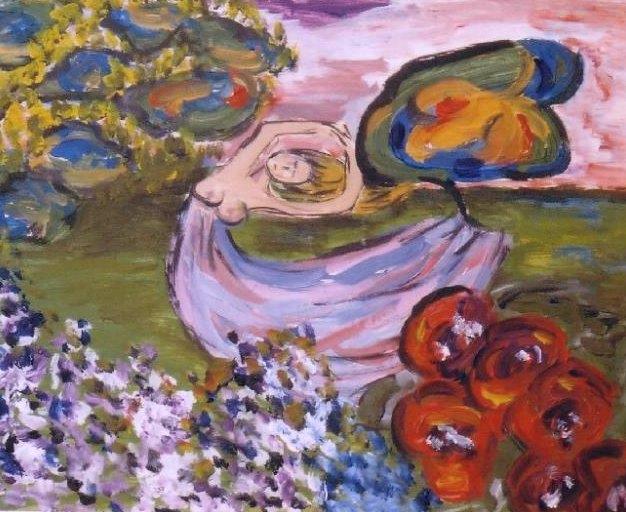 Spirits in the ether
mix, though never have they met,
perhaps never will.

Of importance is the moment,
this moment, and every
contact in either or blood, alters.

Spirits in ether, seeming nothingness
touch, move by, and through,
intentional and thoughtful.

The spirit moves about
on particles created through the energy of one soul,
moved to react by having touched the other.

Demonstrations of affections,
endearment, are every bit as real
as those our primitive senses would witness.

All is not made of flesh,
all does not need flesh,
spirit is eternal, sentient.

Spirit makes us players,
in the eternal theatre of this universe
delicately balanced, the good, the bad.

Nothing we do, or intend,
no thoughts, emotions are
ever inert.

In this universe, each spirit
holds the same power, and responsibility
as the hand of the divine.

From the day I had “grown-up” thoughts running in my head, perhaps from the time I was 12 I had know this would happen. I can’t say why that is. In the background of every decision I had made and every new circumstance I found myself in, in the back of my mind, this is what I knew would be the eventual outcome. The only real mystery was when, and how.

I had imagined, in order to get through my days, that I could somehow keep it happening. Better to think you have some control, than to live in fear every moment of your life. I had imagined growing very very old with a flock of little red-haired grandchildren, but imagination is not destiny. Destiny was a work quite separately from my own efforts at life.

I did what anyone would do. I lived my life. I made friends, lost friends, fell face-first in love, often. Sometimes I fell in love and it went nowhere and other times my heart was broken. All of it was at least part of living life, and so, worthwhile.

I was, I think, unduly preoccupied with the people I cam in contact with, fearful, really. Wondering, is this the person who will cause me to lose my life? Until just now the answer was always “no”, and whether relationships were started or not, I pushed the thoughts away so I had a chance at enjoying the moments.

In some very strange way, having the answer after a couple of decades of waiting is satisfying. I now know I was right to feel it. I was more right in attempting at every turn to ignore the feeling or I might not have had much of a life at all.

I knew now that there was no avoiding it, none at all. There was a destiny at work, certainly, but it had nothing to do with me, until now. I had collided with it.

“Ahh.” The thought made me gasp, I no longer had the breath to groan or cry out. It was very cold, and dim. I was becoming removed from my body. Pain, though extreme in setting every nerve on fire, is also forgotten very easily and not relived. Love, I now know, is relived to the very end. Every person and every pet for whom I had love could be remembered in a nanosecond and the love relived. How wonderful that this is the case.

As he had run the knife across my flesh for the maximum pain, and I cried out with it, I remember the moment, and how horrified I was, but not the pain itself. Endurance had less to do with it than programming. Survival, outlive the moment, to try and get away, to hatch a plot, to be let go. I had tried begging to no avail. Whimpering made him more angry, and when I spat at him he knocked me completely out. Still I woke up, and plead again, as he unmercifully lectured me about his victimization by the women in his life.

I don’t know who he is, or where he first laid eyes on me. He was a cold hand from behind, followed by and exquisite pain which had me lose consciousness. I awoke somewhere. I cannot say where “here” is, I don’t know. It is very dark, very cold. I no longer have a sense of being anywhere. I can no longer smell the stale bedding that made me gag some hours ago. Better still I can no longer smell his sour body odour as his sweat fell on my now completely unprotected body. With all my might I hated him and could do nothing.

I could still hear quite well, unfortunately I could not hear anyone coming to my rescue. So I waited to see how long before it was over. I could feel my own blood running from the gash in my neck slowly running over the established path, more slowly now. Each drop as it fell to the floor, I could hear. Each drop made the end a little nearer.

Always had I known I would die at the hands of another, but I had always thought I could prevent it somehow. Had I not known I might feel less defeated, maybe. I heard the door slam shut and assumed he was gone. Willing my limbs to move, to try and get up, and could not. Drip, drip, drip… 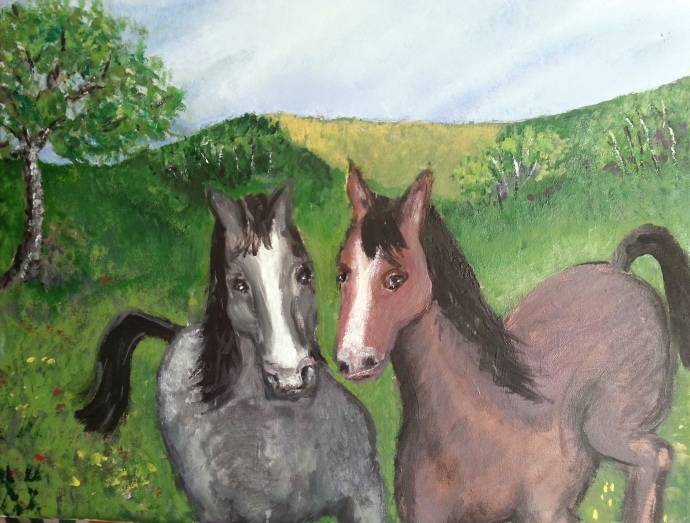 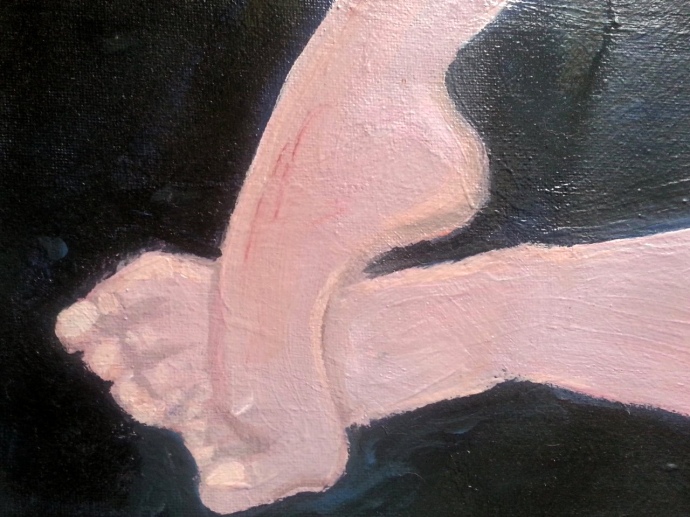 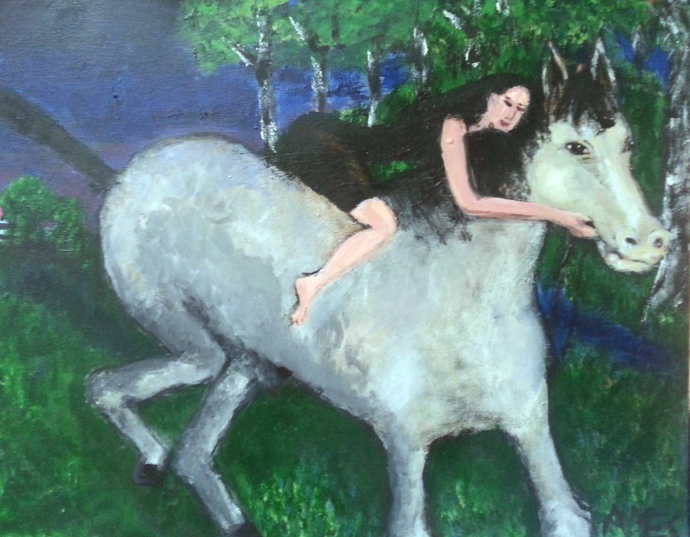